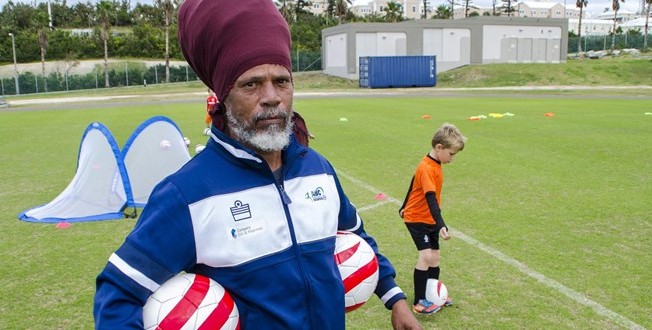 “We’re all alone up here,” Mark Wade chuckled, a smile hiding some hard truth in his words about his island nation. He is Vice President of the FA in Bermuda, a small island 700 miles off the coast of North Carolina. Pull your atlas down off the shelf, or do a quick internet search for Bermuda, and there you will find it: a tiny dot of land alone in the middle of the North Atlantic. “It’s not easy for us,” Andrew Bascome, Bermuda’s national team coach chimed in to FIFA.com.

On the football map, Bermuda is clumped in the Caribbean section of the CONCACAF Zone, but the island of just under 65,000 falls well north of the warm waters of the Caribbean Sea. To reach the likes of Trinidad and Tobago or Jamaica requires a flight to Miami first, and potentially, several layovers. Usually, it’s hours and hours of tiring travel. “We don’t play enough games,” added coach Bascome, 52, who piles rough ropes of dreadlock up under colourful swatches of cloth. “But that doesn’t mean we shouldn’t aim to keep a high standard.”

Next week, the Bermudans travel to Nassau to kick off their 2018 FIFA World Cup™ qualifying campaign against Bahamas. And far from using isolation and logistical woes as excuses, the coach, who took over the reins in 2012, aims to make big waves. “We want to get more in line with the modern game,” he said, pointing at a move away from the all-speed wingers and lumbering target-men that once dominated Caribbean football. “We’ll press high and move the ball quick.”

Football is by far the largest sport in Bermuda in terms of number of active participants. In certain age groups among the children and youth ages, football attracts 50% of the available population.