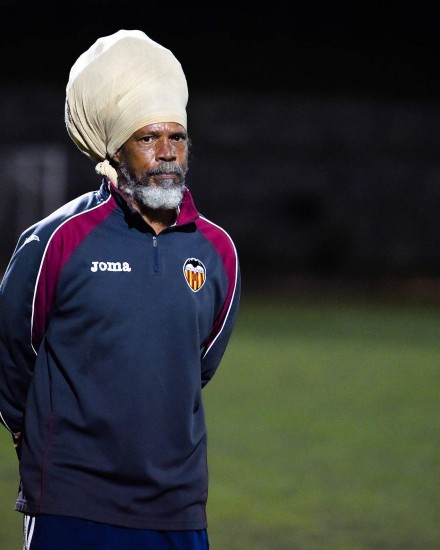 Andrew Bascome emerged from humble beginnings in the close-knit community of St. David’s to become Bermuda’s most highly regarded football coach. His passion for ‘the beautiful game’ came to life as a young man and his talent on the pitch ranked him among Bermuda’s football greats until his dreams of a career as a professional international player were dashed by injury.

He led his various teams to championship wins including the FA Cup, Dudley Eve Cup and Premier Division wins as a player and coach. In his youth he proudly represented Bermuda as a player, and in 1987 joined the coaching team as the Assistant National Youth Coach for Bermuda’s CONCACAF bid against Trinidad and Tobago. He pursued advanced coach training and certification including the Brazilian Coaching D Licence, CONCACAF coaching certificate, USSF, and UEFA B licenses. His history of coaching success was rewarded in 2012 with his appointment as Bermuda’s National coach at the senior level.

In 2006, he participated in a specialist seminar on the French Youth Development Model led by Jacques Crevoisier which represented the beginning of a fruitful partnership between the two. Together, Coach Bascome and Crevoisier initiated a C-License and B-License course for Bermuda’s football coaches. The first 25 coaches received their C diplomas in September 2012. The following year, the partnership yielded publication of the Bermuda Coaching Handbook along with a series of age segmented coaching manuals.

He formed the ABC Football School which would become the ABC Football Foundation built on principles of a modern approach to football and youth development. Coach Bascome forged relationships with Next Generation Valencia Sports to bring the structure, methodology and objectives of a high level European academy to Bermuda to allow coaches and administrators to learn first hand. He started the Next Generation Valencia Development Program @ Victor Scott, delivering an after-school program focused on at-risk children, mixing football education with academic support. Bascome has demonstrated a passion and powerful commitment to the development of football in Bermuda.